I am obsessed with this project. My roommate came home a few months ago after studying at the National Art Gallery with these little pentagons of pressed board with notches cut into them. And by studying, I mean building really cool sculptures that sometimes resemble female reproductive organs. 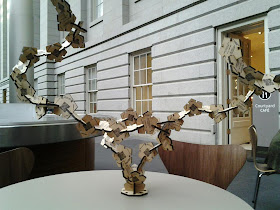 I immediately decided that we would have to do this at the library and then almost as immediately forgot all about it.

Until I saw a Pinterest post in which a mom cut narrow triangles in chipboard squares and let her kids spend hours just experimenting with the types of structures they could build.

Prep:
Using the paper cutter, cut the cardboard into approximate 3x3 squares. I got 160 squares from an average size shipping box. Then, with the scissors, cut narrow triangles about a third of the way through on the sides on the squares. Go crazy with triangle placement, put two on one side, or snip out the corners. They don't have to all be the same, but the notches shouldn't ever go more than half-way through the square. 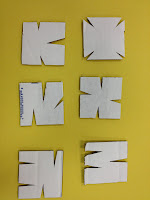 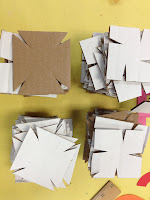 Process:
Lay the squares out and let the kids build!

I presented my kids with a list of challenges to get them started...

Optional:
Once someone has built a structure that they're really happy with, let them paint it and take it home. Paint can transform the structure into a sculpture! 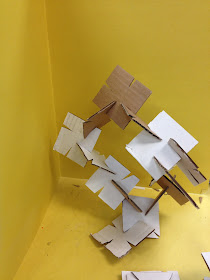 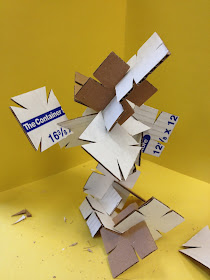 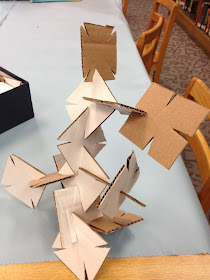